Donato Tallo (a regular author at The Portal Magazine) has sent us this contribution:

A number of pilgrims associated with the Ordinariate, under the spiritual direction of Monsignor Keith Newton, Ordinary in the United Kingdom and Fr Warren Tanghe from the United States, recently returned from a wonderful visit to Portugal. The primary aim of our visit was to be present with the many other pilgrims from across the world who descended on the town of Fatima of the 12th and 13th May in order to accompany Pope Francis for a series of important events at the famous and very Holy Marian Shrine.

The pilgrimage group was in Fatima for four days and we were able to fully embrace ourselves in the spiritual graces of the shrine. While the 12th and 13th of May are always very special days at the shrine of Fatima, this year as many people will know is a very special year – it is the centenary of the apparitions of Our Lady to the three young children to whom she appeared. Pope Francis lead the faithful in prayers and the rosary on Friday 12th and on Saturday 13th celebrated Holy Mass with a huge number of pilgrims, during which he declared Francisco Marto and Jacinta Marto to be saints. It was a truly wonderful and memorable experience for all those who were there. 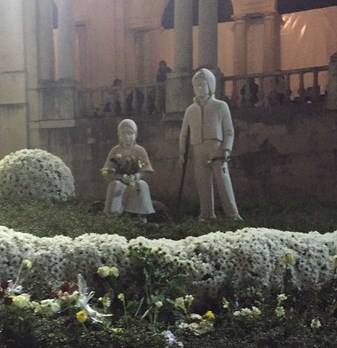 As well as our stay in Fatima the pilgrimage group were privileged to be able to spend time in other places including Lisbon and Porto. We visited many famous landmarks and celebrated mass in some wonderful churches including the church of St Anthony of Padua in Lisbon, the Jerónimos Monastery in Lisbon, the Church of the Holy Miracle in Samtarem, Porto Cathedral and the Church of St Lawrence in Porto.