The photo is from one posted on Facebook by Jane Hodgins, wife of Father John Hodgins of St. Thomas More Parish in Toronto after he celebrated Mass at Christ the King community’s Royal Chapel at Tyendinaga Mohawk Reserve in late July.

Yesterday, John was privileged to celebrate Mass according to Divine Worship Mass in the Mohawk Chapel Royal, Tyendinaga with the Ordinariate Community of Christ the King assisted by Instituted Acolyte Murray O’Coin (pictured). Murray will be ordained Deacon, D.V., on April 24, 2018.

After a delicious pot-luck lunch, Chief Don Maracle, an Ordinariate Catholic, gave John and me a tour and talk about the history of the Mohawk people and their long relationship with the Crown going back to Queen Anne.

The current Chapel Royal is one of only two in Canada and six outside of Britain. The other one in Canada is also in the possession of the Mohawk people at Six Nations near Brantford.

The Chapel Royal deed is held by the Mohawk Band and the Council has authorized it for Catholic worship and the continuation of the Mohawk’s long Anglican patrimony, now in full communion with the Holy See. 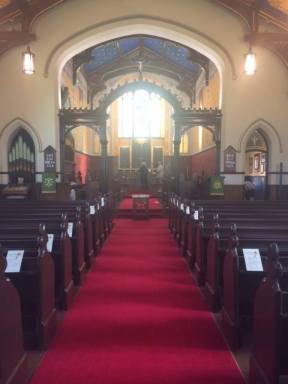 Peter Jesserer Smith, an Ordinariate member and member of the Anglicanorum Coetibus Society has a great article in the National Catholic Register about the importance of restoring the languages of North America’s Indigenous Peoples.

Well worth reading the whole thing, but this part about an  Ordinariate Mohawk community in Ontario is especially interesting:

Murray O’Coin, a lay administrator of the Christ the King community, which is part of the Personal Ordinariate of the Chair of St. Peter, said his entire life he has looked through the Bible with Mohawk eyes and had a deep love for Jesus’ mother Mary even before becoming Catholic, precisely because the Mohawk tradition reveres their mothers. Bishop Steven Lopes has encouraged his community to continue to find ways to integrate Mohawk into the ordinariate’s Mass known as Divine Worship. Besides having the Sign of the Cross, the Our Father and the hymns and carols they have sung since St. Kateri’s day, O’Coin said his community is looking to add the Apostles’ Creed in Mohawk and considering the possibility of whether Collects from old Mohawk translations of the Book of Common Prayer (much of which is integrated into the ordinariate’s missal) could also be integrated into the Mass.

“My bishop is very supportive, and I’m appreciative of that,” he said.

For O’Coin, being able to pray the Mass parts and sing hymns in the living language of his people is a deeply powerful affirmation of what they bring to the whole Church as a people. More Mohawk people have joined the Church because they see the culture alive in their ordinariate community, where they are encouraged to be “fully Mohawk and fully Catholic” and lift up their voices in the Church.

“We have young people hearing those hymns, prayers in Mohawk, and it becomes part of their everyday,” he said.

“Even just being able to pray the Lord’s Prayer in Mohawk, it says being Catholic and being Indian is good. I don’t have to do anything than be what God has made me to be.”