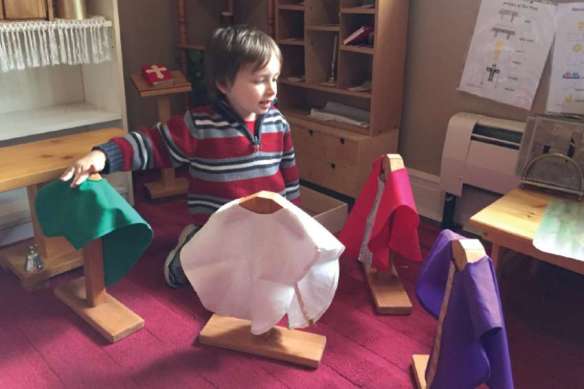 I remember finding Sunday school boring. We heard Bible stories about Jesus and colored mimeographed drawings of Bible scenes.  At the Episcopal church I went to, we made crafts.  I remember making some Nativity scene figures out of Plaster of Paris using a mould, and maybe we even made centrepieces using bits of greenery, acorns and pinecones.  Or was that in Brownies?  If the Sunday school classes were supposed to hand on a Christian faith and a love of Jesus Christ, I didn’t “get it.”

So, how do we ensure children in the Ordinariates for Catholics of Anglican patrimony “get it,” that is a supernatural faith, awe and enchantment?

Fast forward to more than two decades ago,  when I taught Sunday school to a group of 12 year olds at the Baptist church I attended.  It was the most stressful part of my week.  The classroom was in a portable classroom that had some old couches and chairs, as well as a pool table.  At 12, the girls are much more mature and even physically larger than most of the boys, who liked using the pool cues as swords.  I tried to follow the curriculum the church gave me,and I had a young father named John who helped me enforce discipline, which was a constant battle.  “Put down that pool cue!”  “Stop that!” in a drill Sergeant voice punctuated the lessons.

These kids from good, faithful evangelical families were bored like I used to be.  All the stories they had heard before.  Blasé is almost too mild an adjective for their reactions to my teaching.  One day, though, I threw out the curriculum, and I told them what I had been learning about Arius and St. Athanasius, how Arius was a popular singer, and didn’t believe Jesus was God, and was highly persuasive so lots of people were led astray, and about one iota and so on and so on.  I don’t remember exactly what I said that day, but the kids—both boys and girls—paid attention.  Riveted, spellbound, might be too strong an adjective, but let’s say I didn’t have to tell a kid once to put down a pool cue.

It taught me this:  don’t talk down to kids or assume they need a watered down version of the faith.  But recently, I worked on a story for Catholic papers, that has me re-thinking even more how we teach the faith and how we can encourage a sense of wonder and awe and joy in children about God.  The story was about the Catechesis of the Good Shepherd.  I can’t recommend this highly enough:

The program is held in a child-friendly space called an atrium and begins with the Bible and a geography lesson, McClure said. The children use a “beautiful globe of the world” and a puzzle map of Israel to become familiar with the Holy Land. Later on, they use little characters made of clay or wood.

“We proclaim the Word to them, then together we ponder, we listen together,” said Meghann Baker, a catechist from Russell, Ont. “We really have to … see what the Holy Spirit stirs in these little souls.

“There’s a movement of the Spirit within them,” she said. “It happens and it’s real.”

The preparation for Christmas begins by entering deeply into the Advent season.

“We talk about how long before Jesus came the Jewish people had been waiting and heard prophets who listened to God with the ears of their heart,” said Baker.

“It’s so natural for them,” she said. “Some of them have these moments, like ‘Oh, wow, I get it!’ Other times it’s a lot more peaceful than that,” she said. “Sometimes it’s peace, contentment, a quiet sigh. They’ll say things, like ‘My whole body is happy.’ They feel it in their entire being. They feel the profundity of it.”

Baker said every time she is in the atrium with the children she understands what Jesus meant when He said, “Unless you become like little children you will not enter into the Kingdom of God.”

“I watch these little children and the ease with which they receive God’s love, God’s promises and God’s gift and the joy,” Baker said.

One of our children is attending the Catechesis of the Good Shepherd at St. George’s Parish, a Roman Catholic Parish in our neighborhood that participates with us in an annual Eucharistic procession on Corpus Christi. We also helped them sponsor a family of Syrian refugees.

We can see the change in the little five-year-old boy from our parish—-more reverence and interest in what is going on in the Mass, joining in  the responses, even singing.

This version of my story may be a little longer in the Prairie Messenger.

2 thoughts on “Children’s catechesis in the Ordinariates”