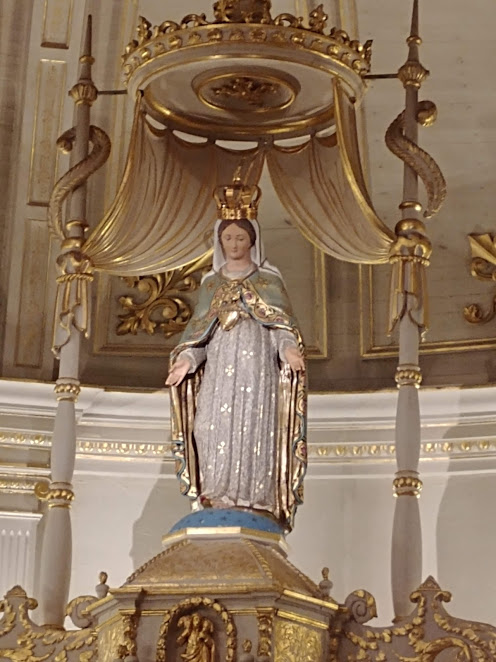 The image above is of the miraculous statue of Our Lady of the Cape at Canada’s National Marian Shrine in Trois-Rivieres, Quebec.  in 1888, three men observed the statue open her eyes and the face take on a human appearance.  Our Lady of the Cape, pray for us.

Sorry for the light blogging recently. I have been busy with my work as a journalist, and perhaps like everyone else distracted by reaction to former U.S. Nuncio Archbishop Carlo Vigano’s explosive 11-page letter regarding ex-Cardinal Theodore McCarrick.

While I do not support +Vigano’s call for Pope Francis to resign—we do not need two Popes-emeriti, especially if both are seen to have resigned under pressure– I do hope the Holy Father will allow an objective investigation of how McCarrick was able to become a cardinal given the widespread knowledge he sexually molested seminarians.  Since St. John Paul II gave him the red hat in 2001, this investigation needs to cover three papacies.

I agree with the call of Bishop Robert Barron for such an inquiry.

It astonishes me that some journalists are minimizing the ex-cardinal’s sexual behavior with young men under his power because it involved adult men over 18, and was therefore not a legally a crime.   I hope and pray the Pope will change his mind the way he did on the sexual abuse scandal rocking Chile and that he will authorize an inquiry and allow prelates to testify and to release relevant documents.

+Vigano dated his letter Aug. 22, the Queenship of Mary, though it was not publicly released until several days later.

On Aug. 22, I was visiting Canada’s National Marian Shrine for the first time.  Some friends of mine, who run the site CatholicinCanada.com and are spearheading a Marian Devotional Movement to make Our Lord’s Mother “known and loved,” had organized a small gathering at the Shrine of representatives of apostolates from Ottawa and Toronto in hopes of generating interest in launching an annual anglophone pilgrimage to the Shrine on Aug. 22 to complement the annual francophone pilgrimage on Aug. 15, the Assumption.

It was beautiful to be in Quebec on that day,  and to see the fervor for Christ and for Our Lady among the participants at this small conference.

The Rector of the Shrine Bishop Pierre-Olivier Tremblay spoke about how Pope Francis has moved all shrines under the Pontifical Council for Promoting New Evangelization.  They can no longer count on parishes sending busloads of pilgrimas as this is declining, he said.

He quoted from Pope Francis’  Evangelii Gaudium.  Not a negative word was spoken about Pope Francis here, instead the focus was all on Mother Mary and Her Son Jesus Christ and what they are doing–right here and now— to save souls, grant graces and favors and miracles.  And there was a lot of joy and excitement among those present.

Here is Bishop Tremblay with some of the Ottawa contingent, after Mass in the Old Chapel at the Shrine on Aug. 22.  Some of these women are fellow spiritual mothers with me in the Spiritual Motherhood of Priests.

Several people gave testimonies that included physical healings and even some miraculous photographs, including one of a figure of Our Lady that appeared to be walking on the pond at the Shrine taken after dark.

It is good for Catholics to love their pope and to be under his spiritual covering as the Successor of Peter and Vicar of Christ, just as it is good for us to  honor our father and our mother.  It is good to honor the God-ordained hierarchy of the Catholic Church and to be united with our Pope and in communion with him.  It is a default position for faithful Catholics.   That is why what is going on in the Church is so painful and disorienting for those of us who are following these events.   It is a time for ever deeper prayer and deeper conversion.   Maybe people who don’t follow all this bad news are a lot better off if they are busy in the fields white for harvest, harvesting souls for Christ!

My pilgrimage to Our Lady of the Cape reinforced the need for me to keep my focus on Jesus and Mary and what they are doing to save souls and sanctify them by the power of the Holy Spirit.