Happy Mothering Sunday!  On this fourth Sunday in Lent, Laetare Sunday, many of us in the Ordinariates for Catholics of Anglican tradition bless a simnel cake and flowers on the altar.  It is one of two Sundays in the Church year where our priest wears rose vestments.  We like to show support for the priest wearing rose by wearing it ourselves.

Sadly, because March did not go out like a lamb in Ottawa, our congregation was much thinner than usual because many could not make it because of snow and freezing rain.

Celebrations are an important aspect of our common identity.  Not all of us would celebrate Laetare Sunday in the same way, but I bet many of you did.  I would love to hear from you and post some pictures from your community.

Every Ordinariate community I know of ensures the fellowship time after Mass is well supplied.    Several times a year, we do something extra.   At Annunciation, we have an annual Thanksgiving dinner in October (Canadian Thanksgiving falls on what used to be called Columbus Day in the United States, a Monday in early October.  We have turkey, ham, stuffing, mashed and scalloped potatoes, squash, peas, cranberry sauce, the works.

We also have an Epiphany Dinner that is more of a potluck affair with lots of crock pots full of chilis and stews, salads, platters of ham and other meats.

In the summer, we have a parish picnic outdoors.  Last year we went to the Eastern Catholic camp in Quebec.

What does your community do for celebrations? 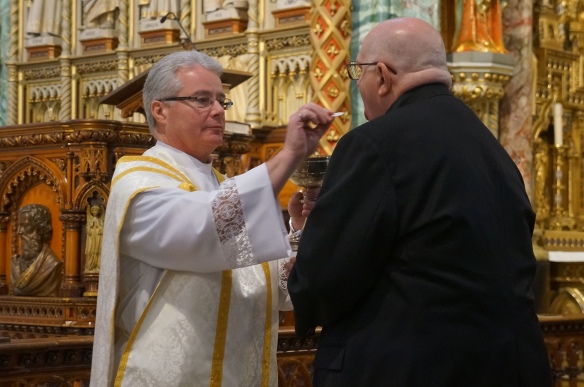 At the same time, the Holy Father accepted the retirement of Msgr. Harry Entwistle, who served the Australian ordinariate since the beginning.

We in Ottawa know Fr. Reid well, because he was our rector and suffragan bishop of the Anglican Catholic Church of Canada in the run-up to our being received into the Catholic Church.

He is a deeply faithful Catholic, a leader and this will be quite the adventure for him and his wife Barb.

What a joyous event we celebrate today!  Mary said, “Yes” to God’s plan and God the Son became incarnate in her womb.

We have a sung Mass tonight at Annunciation of the Blessed Virgin Mary because this is also our feast of title.

In other news,  I am nearing completion of the paper I promised for a book that will be published in the fall marking the ten years since Anglicanorum coetibus.  Thus, I expect I will be able to return to more frequent blogging.

During the penitential season of Lent, we focus on repentance and on dying to self as we approach Easter.

Our Anglican tradition —in our mass and our offices—does a beautiful job of keeping us aware of our need for mercy, of our status as “miserable offenders,” and our utter dependence upon God for His grace.

Sometimes, however, I wonder if we run a danger of living too much in Romans 7.  END_OF_DOCUMENT_TOKEN_TO_BE_REPLACED

This response led to attitudes of contempt not only towards Hepworth, but also for the Traditional Anglican Communion (TAC). he led.  That contempt nearly destroyed the dreams of TAC communities of ever being accepted into the Catholic Church with their clergy.

I believe it is Cardinal Pell who rescued us, because through a mutual friend of both men, he advised Hepworth to go to through the Melbourne process he had created to handling sexual abuse claims when he was Archbishop of Melbourne.

That process, led by a Queen’s Counsel with vast experience in hearing and weighing clergy sexual abuse claims, vindicated Archbishop Hepworth.  The QC believed him and that marked a turning point, I believe, in rescuing what seemed like our shattered prospects of entering the Catholic church as intact communities,

Because of Cardinal Pell’s help behind the scenes in this case, I join those around the world who find his conviction in a second jury trial of sexual abuse of minors a miscarriage of justice. END_OF_DOCUMENT_TOKEN_TO_BE_REPLACED

Caroline Farrow is the wife of a priest of the Diocese of Arundel and Brighton in the U.K. and the mother of five children.  (I had mistakenly said her husband was an Ordinariate priest)

She is also a journalist, has a lively Twitter feed, and appears sometimes on British television to defend conservative Christian moral positions.   This makes her greatly unpopular with more progressive elements of the population.

Farrow recently received a phone call from police saying they were investigating her for having “misgendered” the child of a Trans activist on Twitter.  In other words, if you talk about the boy who underwent hormone treatment and surgery to present as a girl, you run afoul of British law.

The woman who filed the complaint has since said she has dropped the complaint and that it was more serious than mere misgendering, but as far as Farrow knows, the police investigation is still ongoing.   Farrow wrote the following on Facebook this morning:

I am not brave, ballsy, pugnacious, limelight-seeking or any of those things. Right now I am vomiting, shaking, lost 5 lbs since Monday and suffering extreme anxiety. Being stubborn, refusing to be cowed is not any kind of virtue. I know that I will not win. The virtue and victory lies in bearing the suffering with grace & in knowing that I am doing what is right. My detachment lies in letting go of that which is most important to me; security and financial stability. I have had to accept that I will now never be able to get that nice stable well-paid job I hoped for.

Canada also has human rights legislation, provincial and federal, protecting  gender identity and expression from discrimination.   One of the reasons why Jordan Peterson, a psychology professor at the University of Toronto, catapulted to fame a few years ago was because he decried the transgender laws as state-compelled speech and said he would refuse to comply.

Please pray for Farrow and her family, for her to have the peace of Christ, and the wisdom that can only come from the Holy Spirit in navigating these legal and spiritual challenges.

Pray as well for true pluralism in our democratic societies of the west, instead of a totalitarian one-size-fits all progressive ideology that one obeys or else a penalty of hefty fines and even jail terms.  Pray we can learn to air genuine and deep differences in the public square with civility and respect, always keeping in mind that we are dealing with other human beings, and we as Christians hold to a notion of human beings made in the image of God.

If one looks at the trajectory of public policy these days, traditional Catholic morality is on the verge of being called hate speech and banned from the public square.

UPDATE:   Here is a detailed story about Caroline Farrow and the complaints against her in the U. K. Daily Mail.

Members of the Personal Ordinariate of the Chair of St. Peter will have received their copy of the Ordinariate Observer in the mail, and it’s chock full of good news about how we are growing and where.

I have been working on an paper for a book scheduled to come out next fall to mark the 10th anniversary of Anglicanorum coetibus.  It’s been a lot harder and more demanding to do than I had thought and that on top of my journalism work is the reason for light blogging.

The topic for my paper is lay initiatives to promote Anglican patrimony within the Ordinariates, and to that end I have done many interviews with people who took it upon themselves to do something in this vein.  Of course I ended up with far more material than I could ever use for a 4,000 word article, so I hope to use some of that material here when the deadline crunch is over.

As I surveyed all these interviews and have begun the boiling down process, I could not help but feel excited and encouraged by how much is going on at the grassroots level.

We have so much to be thankful for as Catholics of Anglican tradition, and there’s so much going on in terms of prayer, music, social media, literary patrimony, I won’t be able to fit everything in.

In the most recent edition of the Ordinariate Observer, the publication of the Personal Ordinariate of the Chair of St. Peter, the vocations director Rev. Rick Kramer writes:

“One of the most frequently asked questions I get is: ‘Are you still receiving inquiries from Anglican clergy who are interested in converting?'”

“The Vocations Office receives three to four new inquiries each week,” Kramer writes. “Most of the men who contact the Ordinariate are somewhere on their journey into the fullness of the Catholic faith.”

“Foremost, they desire to know, as a disciple of Jesus Christ, how to become Catholic.”

This is encouraging news!

Meanwhile, I would encourage Anglicans who are still discerning whether to become Catholic to consider joining us at the Anglicanorum Coetibus Society.  Our mission is to promote the Anglican tradition and common identity in the Catholic Church for the purposes of evangelization, education, deeper conversion and the glory of God.

For me, the traditional Anglican worship of my parish was key in my coming to the Catholic faith–and we find that spiritual ethos now expressed in our Catholic Divine Worship Missal, our offices, our hymnody, our spiritually meaty sermons, and community life.  As Pope Benedict XVI wrote in Anglicanorum coetibus:

Without excluding liturgical celebrations according to the Roman Rite, the Ordinariate has the faculty to celebrate the Holy Eucharist and the other Sacraments, the Liturgy of the Hours and other liturgical celebrations according to the liturgical books proper to the Anglican tradition, which have been approved by the Holy See, so as to maintain the liturgical, spiritual and pastoral traditions of the Anglican Communion within the Catholic Church, as a precious gift nourishing the faith of the members of the Ordinariate and as a treasure to be shared.

If one is a clergyman or a lay person eligible for membership in the Ordinariate, the Society hopes you will consider forming a patrimonial group.  It is as simple as holding a monthly Evensong at a fixed time and location and letting us know so we can put you on the map at our website.

Some other encouraging news in the Ordinariate Observer.  Rev. Kramer reports the Ordinariate is “in the early stages of planning an Ordinariate house of formation, which will complement seminary formation, for the express purpose of transmitting the Anglican patrimony to seminarians.”

The Apostolic Constitution Anglicanorum coetibus gives the Ordinaries permission to create these houses of formation in Anglican patrimony:

§ 5. Candidates for Holy Orders in an Ordinariate should be prepared alongside other seminarians, especially in the areas of doctrinal and pastoral formation. In order to address the particular needs of seminarians of the Ordinariate and formation in Anglican patrimony, the Ordinary may also establish seminary programs or houses of formation which would relate to existing Catholic faculties of theology.

The Anglicanorum Coetibus Society claims no rights to the photographs, videos and texts by third parties which are posted or quoted on this blog. If for any reason any object is called into question, or if the particular owner has an objection to its being displayed, please contact us and it will be removed.

All 150 Psalms sung by Church of England Cathedral Choirs