Attendees of the Toronto Conference on the Anglican Tradition in the Catholic Church, November 15–16, were warmly welcomed by Cardinal Collins, in whose cathedral we celebrated our main liturgical services.

In addition to letters of greeting from Bishop Steven Lopes and the Papal Nuncio to Canada, Cardinal Collins sent us a generous letter for our conference programme. His Eminence cited Anglicanorum Coetibus, noting that as the Anglican approaches to the Holy See had been motivated by the Holy Spirit, “This is why it is most fitting that your thanksgiving on this occasion will begin with a votive mass of the Holy Ghost, celebrated in St Michael’s Cathedral….” 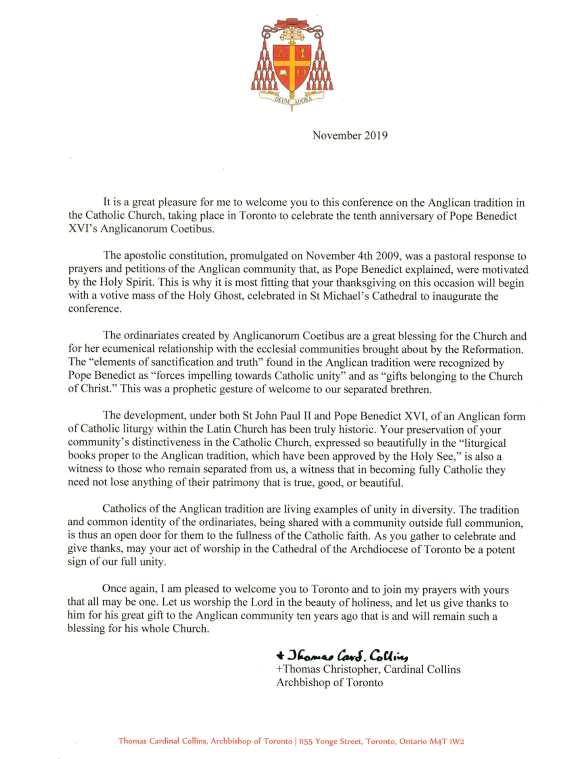 The Cardinal spoke of Anglicanorum Coetibus as a “prophetic gesture,” and said “The development, under both St John Paul II and Pope Benedict XVI, of an Anglican form of Catholic liturgy within the Latin Church has been truly historic… Catholics of the Anglican tradition are living examples of unity in diversity. The tradition and common identity of the ordinariates, being shared with a community outside full communion, is thus an open door for them to the fullness of the Catholic faith.”

We owe Cardinal Collins our tremendous gratitude for having hosted us and for having so warmly welcomed everyone to his Cathedral for our 2019 Anglican Tradition Conference. After the mass, the AC Society presented His Eminence with a gift to thank him for his role in helping to establish the ordinariate in Canada almost a decade ago. Read his whole letter!